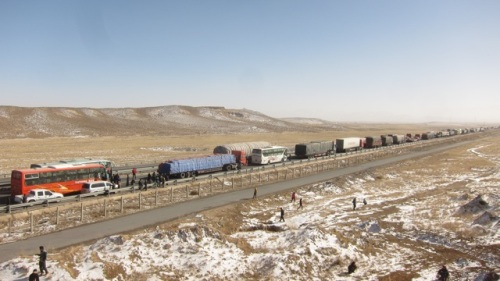 We’d crossed the border into the north west of China after a 22 hour overnight sleeper bus which was quite pleasant. However all we wanted now was a train ride, you get a bit more space and it’s generally a more comfortable ride than the buses. I stared up at the display board in the main train station. It didn’t take much deciphering to realise there were no seats or beds on any train heading south. It was a muslim holiday and everything was booked for 5 days ahead.

Another sleeper bus seemed the only other option for the 2900km journey south. We scouted around for a bus and after trying a couple of different stations in opposite sides of the city we were finally sold a ticket for a sleeper bus and told the journey would take 26 hours. We went for some food, pumped water through our filter and boarded the bus a few hours later. There were no beds on the bus and there was no way to take back our tickets. We wanted to head south and this was our only option. A translation from another passenger hinted at 38 hours and after sitting for 2 hours in the station we hit the road, bitter that we’d been lied to, bouncing in our unfixed seats above the back axle of a very ropey looking bus!

The most arduous, weirdest, smokiest, longest and coldest journey of our overland trip was underway. Within a few hours we were driving across the desert in a sand storm. Everyone looked a little scared as the bus was thrown around, creeping forward when visibility allowed. We soon had to pull over and for some reason once the passengers got out the driver locked the door leaving us all to avoid the sheets of metal being blown around outside, covering our faces and huddling together. We still don’t know why he wouldn’t let us back on the bus???

No sooner had we got going again we were stopped. This time for 5 or 6 hours. Next came the snow storm and the frozen highway. It was becoming clear that however long this journey was supposed to take, we should double it and add on an extra few hundred hours. The no smoking rules had been chucked out the window, and outside it was too cold to open them to let the smog clear, Nina’s feet were swelling as we’d been sitting so long. One ten hour delay seemed to melt into another…

We started counting the hours between broken sleep.

It was Sam’s birthday and we spent the whole day and night in a traffic jam watching the local’s eat chickens feet whilst we went hungary, hoping we would soon get going again and stop somewhere for food. The spitting continued all around us, a quick go on the ipod every few hours helped to forget where we were. If only there was something interesting to look at out of the window, but it was bleak.

On day three we started to enter into landscape with people and houses and later that day we were driving through Sichuan with high pastures, tibetan cowboys on horseback, yaks and traditional houses. We were delirious by now and kind of settled into the journey.

We arrived in Chengdu on the forth day morning, 83 hours after boarding the bus in Urumqi. It was hard to feel anything but delirious. Sleep was slim pickings since the first night but we’d made it and we can probably thank the other passengers for their contentment. It must have rubbed off on us.

Read more about the journey on Nina’s blog – proverbial chicken’s foot: a bus ride from Urumqi to Chengdu