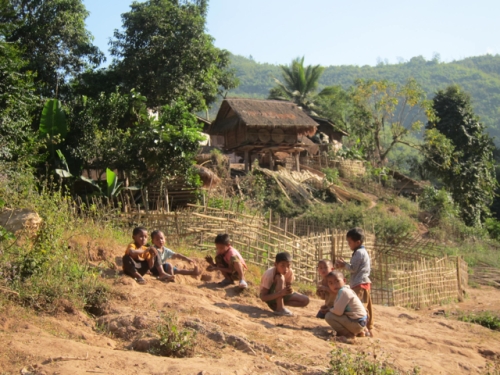 It’s been nearly a week since Nina and I dropped down from China into Laos on the bus. The difference in the feel of the country was instant. China was developed and overpopulated right up to the border and as soon as we crossed into Laos small thatched shacks on stilts started to appear in the landscape with only a sprinkling of people in ramshackle villages along the main road.

First stop was Luang Namtha, 60km from the frontier. Seems that many tourists come here for the jungle adventures that northern Laos has to offer and we were subtly shocked by the amount of “felang” (foreigners) in town. 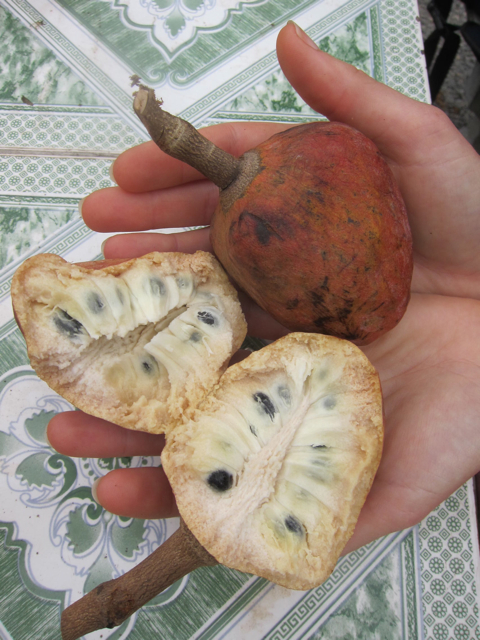 We found ourselves a cheap place to stay and grabbed a feed at the night market. We’re into sticky rice territory now, along with new and unusual tropical fruits. The next morning we stockpiled our fruit stash at the market and treated ourselves to pink custard apples, bananas and pawpaw. The array of fruit was incredible, laying side by side with dead bats and songbirds, all local delicacies. 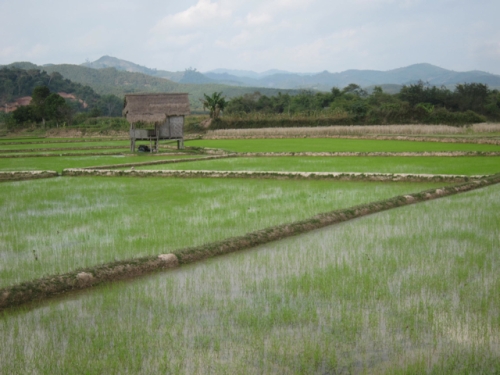 In the afternoon we hired bikes (80p per day) and cycled a loop to explore some local villages and the old and new stupas. The original 1658 stupa had been bombed by US planes during their epic airstrikes of the 60’s and 70’s. Laos is the most bombed country in history with more bombs landing here than in Germany and Japan put together. Today a new stupa stands next to the remains of the old. For a more in-depth insight into the CIA led tragedy The Most Secret Place on Earth is a must watch. 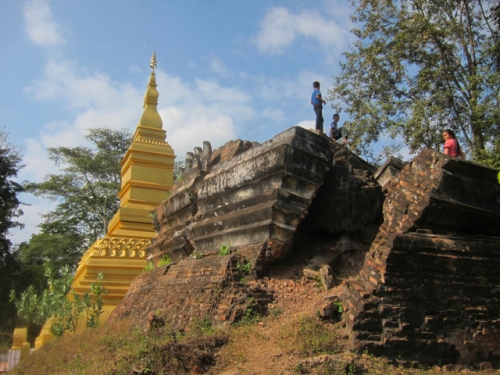 Later on Friday evening we booked ourselves onto a 3 day trek and kayak through the Namtha National Park. A kind of treat to celebrate 1 year on the road, 10,000 website hits and a new country all rolled into one.

We chose a joint Laos/Kiwi adventure specialist called Forest Retreat Laos who assured us that at least 32% of our money goes directly to the village who will host us on our first night. They have used recent donations to build a new temple, clinic and school. £51 for an all inclusive 3 days trek/kayak with food, drink, guides and accommodation seemed very reasonable to us. 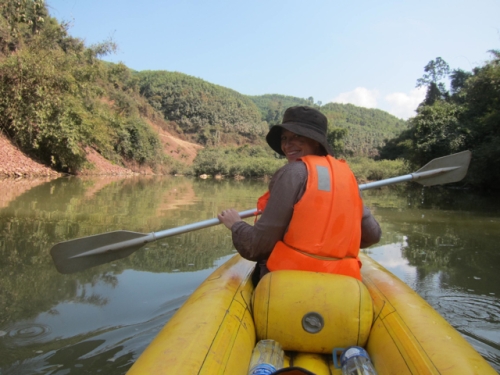 We set of early on Saturday morning in a tuk-tuk. 3 Brits, an Italian, a Spaniard, an Ozzy and a Dutchy plus 2 Laotian guides and a roof full of kayaks. A 40 minute drive brought us to a small village on the banks of the Namtha river where we off loaded and filled our rubber kayaks with air. The locals looked a little bemused but we were soon out of their way and off down the river on a 20km paddle. Lunch was prepared on the banks half way along and after an exerting but satisfying day we rocked up at a riverside village and a purpose built shack for sleeping. 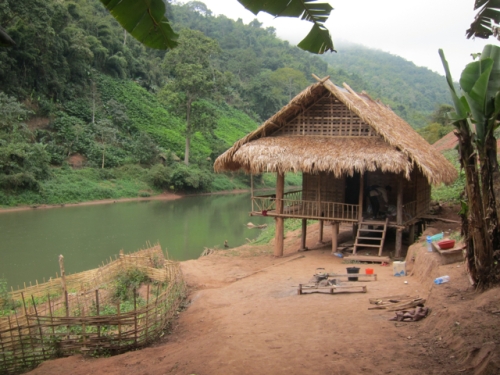 It gets dark around 6pm here. Pon showed us around the village then a boiled fish dinner came at about 7pm and I think we were pretty much in bed by 9pm.

A day and a half of trekking followed with a overnight stop in the jungle. We were told that the bamboo structure we slept in along with the toilet shed and guide accommodation was built by a team of locals in 2 days. The whole structure built from bamboo and vines… it made me want to learn more about how to construct with this extremely versatile material. 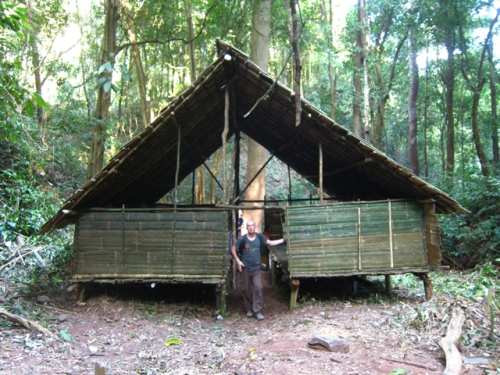 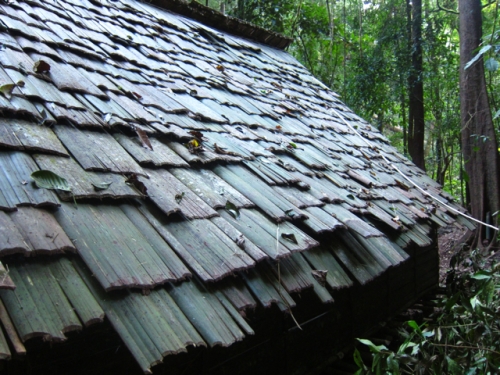 Our group had been joined by 2 ladies from the village for the trekking. Along the way we were shown various plants that locals use from the jungle. Joy even scraped bark from a particular tree when he heard Nina’s tummy was a little dodgy. Within an hour 2 days of discomfort were cured – amazing. 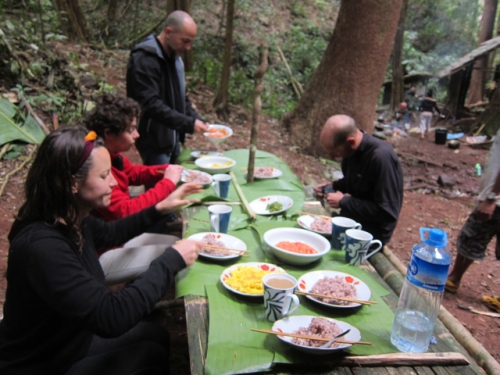 On saturday night we had a beautiful jungle meal which included rattan starch, banana flower, jungle mushrooms and wild greens – so so tasty! A similarly good breakfast set us up for the final trek to the river, trousers rolled high, boots around the neck and across the water for the tuk-tuk ride back to town. Even a puncture on the way home couldn’t bring a frown to an amazing 3 days in the jungle. 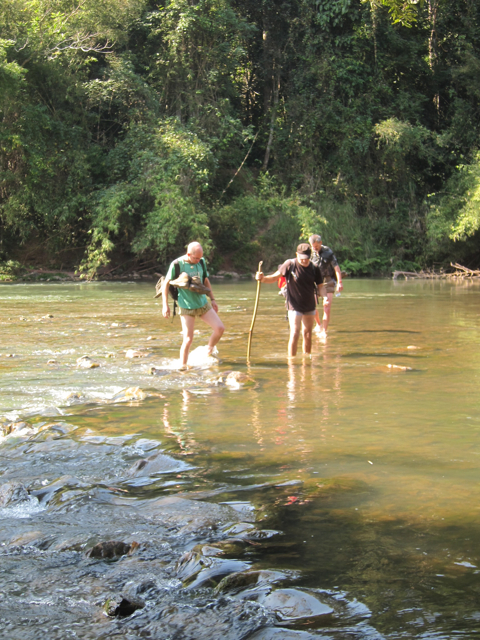