Can Coll – Survey and Assess

For this stage of the design process I will use the OBREDIM(ET) tool to make sure that I don’t miss any stages of observation.

Here is the snippet describing Can Coll from the Wwoof host website;

“We are a young couple living in a 17th century renovated farmhouse in the lower Pyrenees. We are in Alta Garrotxa, a wild and untouched region of the Girona Pyrenees, a rough, solitary limestone middle-mountain area covered with Mediterranean dry forest (holly oaks, oaks and pine trees) on the sunny slopes, and lush humid vegetation (chestnut trees, beeches, black poplars, etc) on the shady ones. Surrounded by woods and silence for many miles around, at night we can’t see a light other than the moon and the stars. We enjoy more than 300 sunny days a year; nevertheless, we are on a pass between two valleys watered by the streams feeding the river Muga, which accounts for our abundance of water and the luxuriant green around us.

We live in harmony with the mountain and the forest that are so generous with us.  The house is practically self-sufficient: the heating is worked by the central fireplace (with water tank), and electricity is produced by solar panels. And in terms of food we are also almost self-sufficient: we make our own bread, pasta, game sausages, pâtes, marmalades and jams (from our fruit trees and berries, and from wild berries and chestnuts), and we grow our organic vegetable terraces from which we eat all year round. We also have chicken, ducks and turkeys. And we recently took a horse but we are still learning how to deal with it, so that help with the horse is most welcome. We want her to help us carry wood.

In winter we need help making firewood, making sausages, clearing paths and with general maintenance; and, the rest of the year, we have much work in the gardens and making preserves (tomato sauce, pickles, chutneys, etc), jams, licours, drying medicinal herbs and mushrooms, etc.

Those who volunteer with us have to be in very good  physical conditions, for we have to go many times up and down the steep slopes and keep active all day long.  We practice Vipassana meditation and Qi Gong every morning and evening.  We are 30km. away from Figueres and 6km. of dirt road from Albanyà, the nearest village, where we can pick you up.  And we don’t accept dogs (when you come you’ll understand the reasons why).” 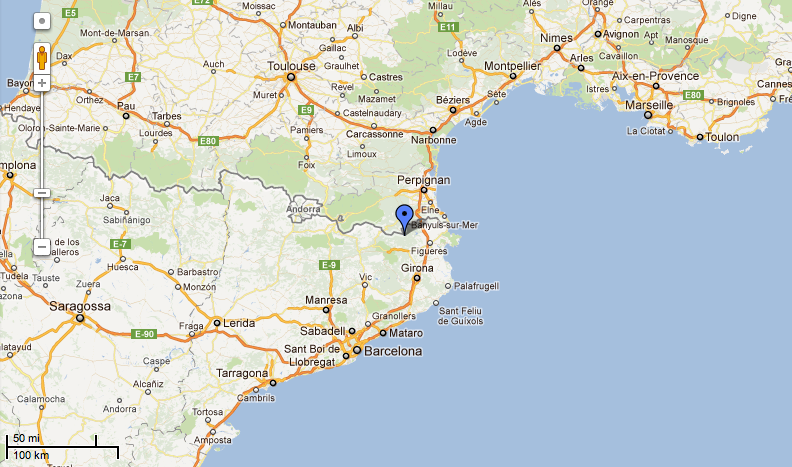 Below is a map showing the farm amongst the surrounding countryside 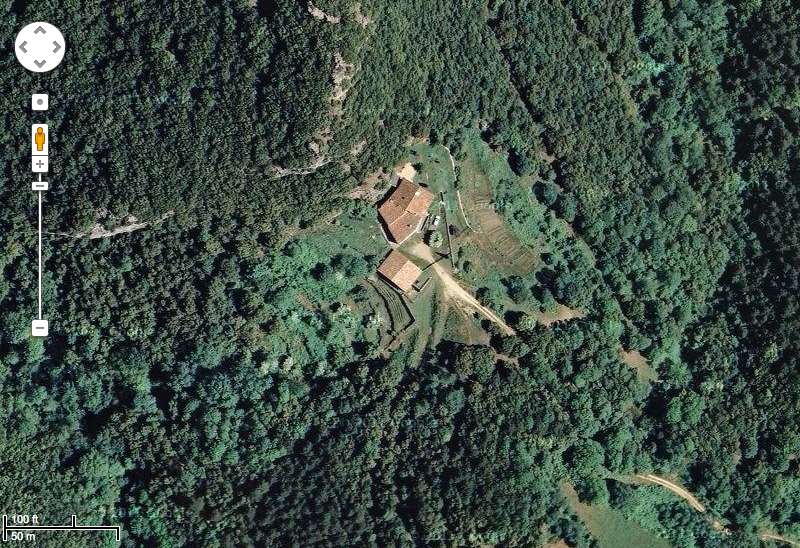 Here is a closer view 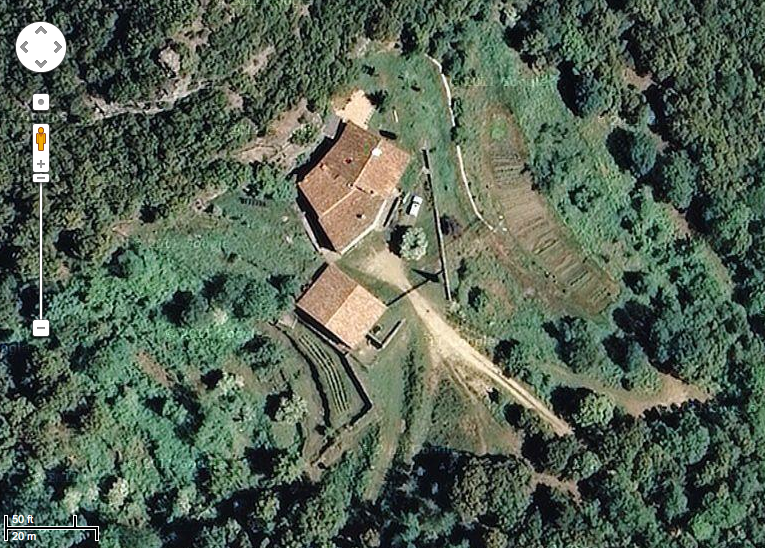 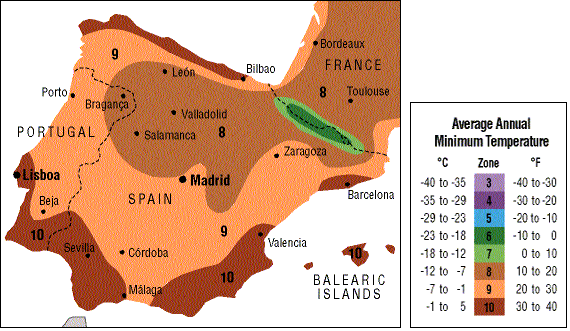 Dino explained that at worst the property gets down to -15C in the winter but they actually receive 300 days of sunshine a year.  As the hardiness map above confirms they are actually considered zone 7 for the purpose of plant choice and may even be able to grow zone 8 plants in a beneficial micro climate.

The property is surrounded by limestone mountains mostly covered in holm oak forests with clumps of sweet chestnut in some areas.

The house is on a saddle with terraces stepping down to the north east where most of the vegetables are grown and to the south west where a potential camping area, natural spring and the two unused cisterns can be found.

How Amanda and Dino use their water 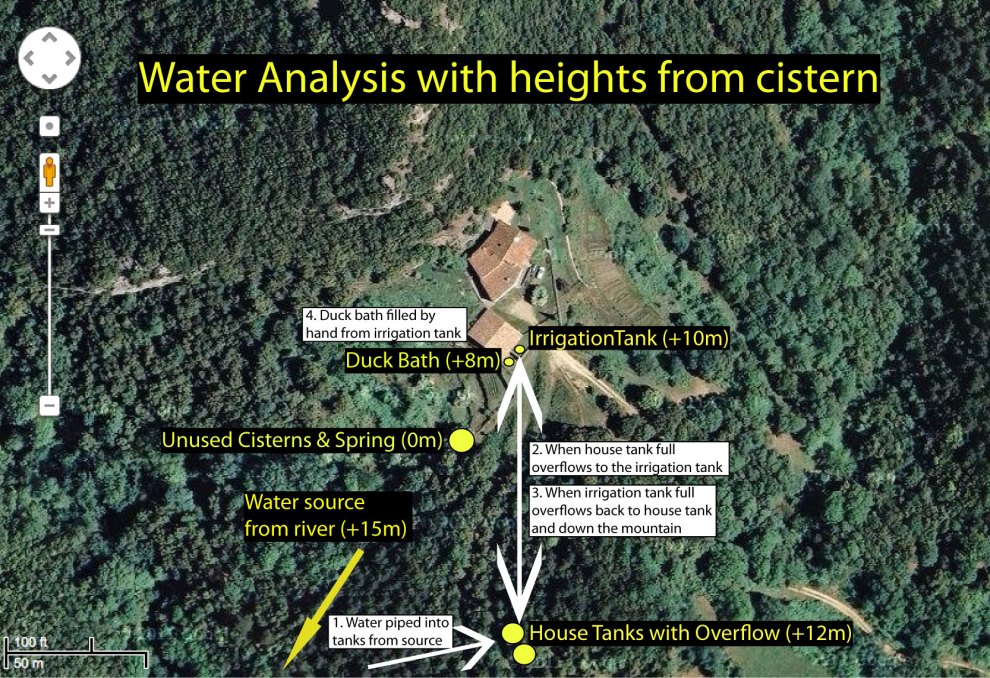 An understanding of the current water use for the property was the first thing I needed to understand.

Water enters the two tanks used for the house water from a river some distance away on the opposite side of the valley.  The pipe dips down into the valley and then climbs up to the tanks.  The tanks constantly fill as the point of the source is higher than the tanks, approximately 3 metres, and water flows from the river permanently. Once the house tanks are full the overflow runs through another pipe to an IBC tank above the chicken and duck enclosure which is used to irrigate the terraces and fruit trees below on a drip and spray system. Once the irrigation tank is full the overflow goes back to the house tanks and overflows down the side of the hill.  This water is considered surplus. The concrete bath sized pond in the duck and chicken enclosure is filled and cleaned by hand using a hose from the irrigation tank above.

The tanks are part of the north facing terrace, they are below the terraces currently used for potatoes but slightly above the area that Amanda and Dino would like to use for camping. The whole terrace area is fenced. 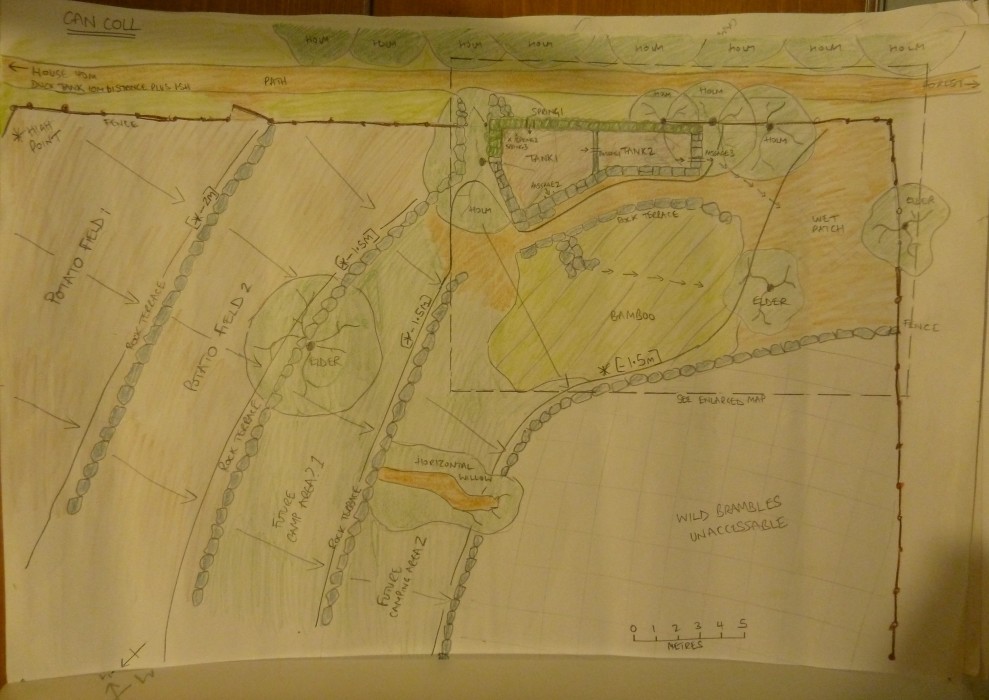 From now on I will refer to the tanks as Tank1, Tank2 and DuckTank.

Tank1 has a constant inflow of water from Spring1 similar to that of a tap – half on. It also seems to have water coming in from the bottom through Spring2 and Spring3. Dino says that it has been constant since they arrived at the property but has never filled the tanks due to a leakage somewhere. Tank1 seems to be leaking through the bottom and the excess water is trickling down to the bamboo patch which is doing very well indeed with the constant water supply.

The water flows from Tank1 through Passage1 to Tank2 and then out through Passage3. From here the dogs like to drink. The water then flows down to a slightly wet sunken clearing adjacent to the bamboo grove.

All water then continues on, down the side of the mountain, where it eventually rejoins the stream below.

Overhanging Holm oaks
Bamboo below
Elders below
Ivy, fern, stinging nettles, moss, brambles all surround the tanks and are growing from the wall. Ivy is high on the south wall of Tank1 and Tank2.

In the small amount of water that exists there is a large amount of leaf litter, tadpoles and a crustacean that I have not yet identified (i have since inquired with an expert who identified it as dragonfly larvae, Thank you Pete). There are lots of beetles and a newt.  We also came across a salamander some 50 metres away on the path.  Birds gather in the bamboo. 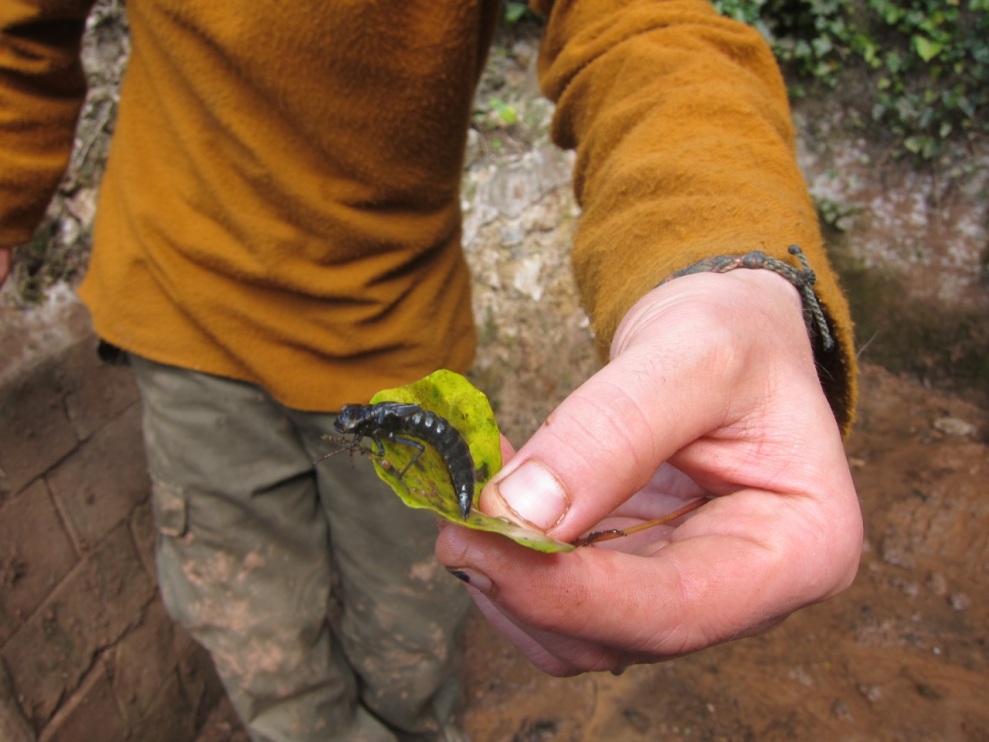 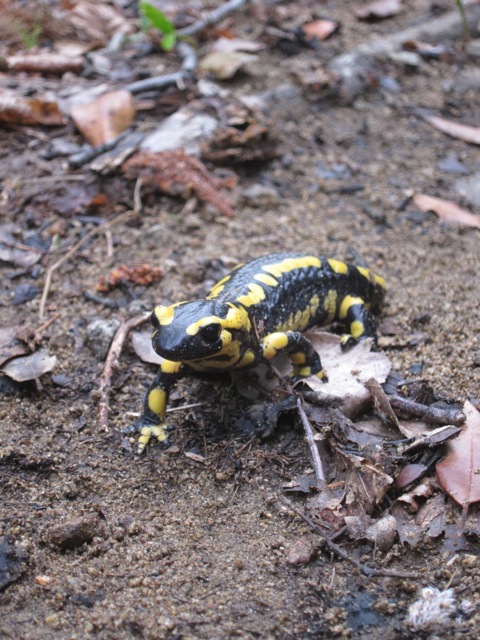 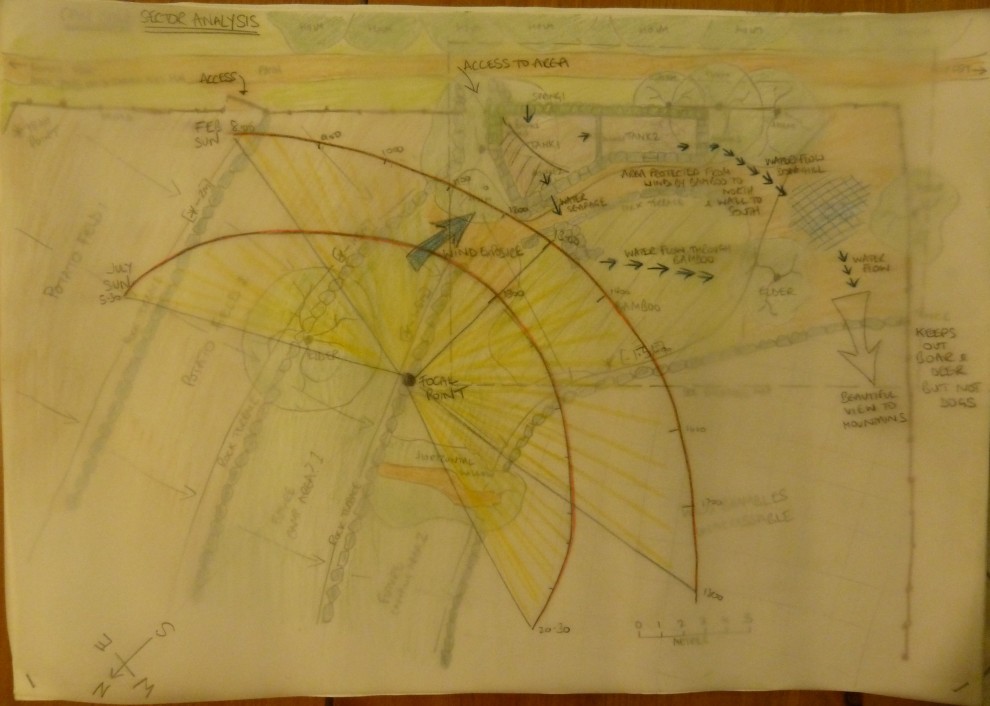 The tanks are well sheltered from wind by the south eastern wall, holm oak forest and the bamboo to the north west. The sun first appears on the north eastern side of the tanks at around 13.00 in winter and 12.00 in summer and dapples the tanks for the remainder of the day.

The tanks are built from stone and lime.  Repairs have been made using concrete. The bottom of Tank2 is tiled and still seems to hold water. The walls are 40cm thick. There seems to be lots of attempts to repair them over the years which may be an indication as to how much water they are likely to hold.

There are wild boar in the area which cause a lot of damage if they make it into the garden area. There are also deer. The area with the tanks is fenced from these although the dogs can still make their way through the fence and like to drink from water passage3.  There are also 20 chickens and 3 ducks.

The area is less visited than the Southern terrace which has the majority of vegetables and fruit trees but Amanda and Dino are planning to use the adjacent terrace as a camping area in the future which would make for more visits than present. I would consider the area Zone 3 at present. 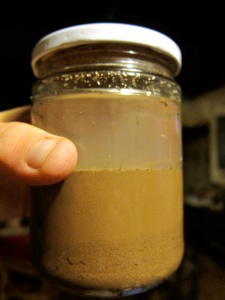 Based on the design concepts my first priority is to see if I can seal the tanks. For this I will create the conditions for my next observation.  First I will need to let the present water seep out naturally whilst siphoning off any new flow.  See the video below.

The siphoning was a really interesting process but it didn’t really work so well.  I then tried some different approaches to see if I could identify a) if both tanks leaked b) where each tank eventually levelled out – individually.

Test 1 – I blocked passage3 with a rock and some clay and left it overnight with the water filling Tank2 though Passage1
Result – Tank2 filled and levelled out at approx 40cm deep at the western end and backed up to Tank1 where it continued to leak.  This means that if Tank2 was filled independently, whilst blocking Passage1, that it may fill to a higher level.  Tank1 started to leak when the eastern end was approx 7cm deep.

Test 2 – I blocked Passage1 to see how deep Tank1 would fill independently and left overnight.
Result – Tank1 filled to the same 7cm level and then continued to leak.

Conclusion – Tank2 holds water at a higher level and may go higher still with an independent inflow where Passage1 is blocked.  With no extra work Tank2 could be used for fish providing the water level holds permanently.  Tank1 seems to hold level at no more than 7cm which could be used to grow mostly plants. 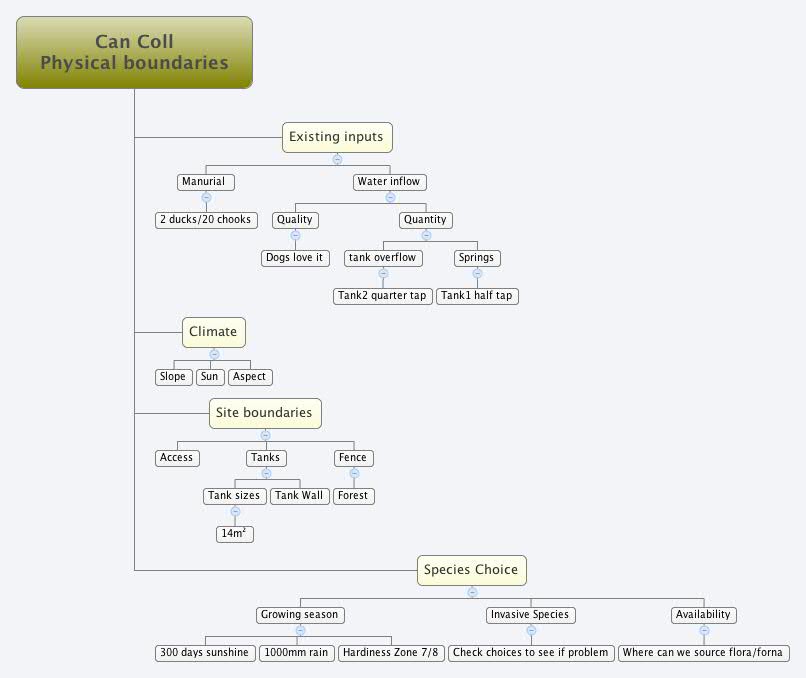 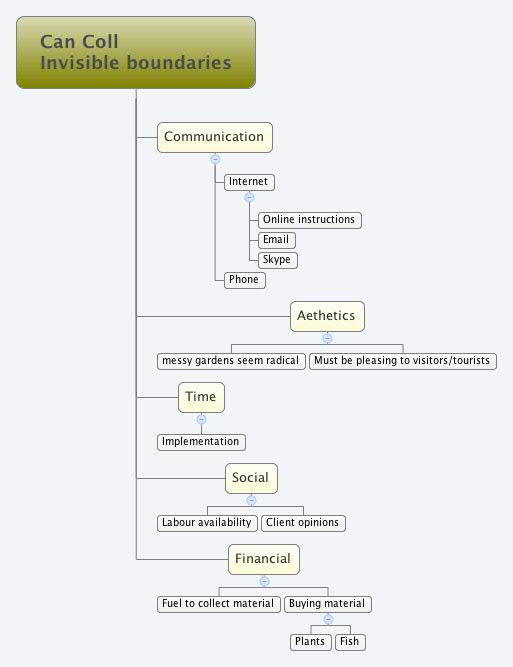 Based on all of the observations, resources and our limiting factors I feel that we have an ideal opportunity to interconnect certain resources, taking into consideration our boundaries to create a small scale system that can be both productive and beautiful.  One that can create an abundance in food and wildlife which in turn will benefit both Amanda and Dino plus the environment in which it exists.

I would like to save time, money and energy by making small adjustments to existing resources and bring in small amounts of extra flora and fauna to improve on what they have.  By adding soil to tank1 I can create and edible bog garden.  A small tweak for a large improvement.  By blocking passage1 and redirecting nutrient rich water from the ducktank I can create an aquaculture system to include animal protein.  I consider this the best use of time and energy.  Any number of additional growing mediums can be added once an initial example of what’s possible is established…